Good news for Vietnam NT ahead of King’s Cup

Thể Thao 247 - According to the latest news, defender Pham Xuan Manh will soon be back to training with his teammates in SLNA club.


After a long period of injury, defender Pham Xuan Manh is going to finish his treatment and come back to SLNA.

Xuan Manh, experiencing exercises after getting injured in the Promotion Fund of Vietnamese Football Talent (PVF) academy based in Hung Yen, will finish his treatment process and back to training. Based on the treatment plan, he needs 6 months for recovery, it is expected that he will come back on May since his injury in National cup 2018.

After Vu Van Thanh, football lovers are able to watch Xuan Manh back in the national team. These 2 players’ absence made Mr Park struggling to find other replacements. Fortunately, Trong Hoang is an interesting finding in right wing side, who played for Vietnam Nt in AFF Cup and Asian Cup.

Xuan manh had reputation from 2018 AFC U-23 Championship and became Mr Park’s first choice for wing side. SLNA is waiting for not only Xuan Manh but also Van Duc, Hoa Tuan Tai to recover. Van Duc, Ho Tuan Tai will come back in 2 months.

Coach Park Hang-seo, if he gets lucky, will own the best players to prepare for King’s Cup and World Cup 2020 Qualifiers. 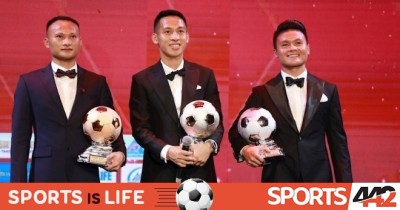